The magnificent grey stallion was as fast as anything ever seen on an Australian racetrack but traffic crawled around Doomben as punters rushed to have one last look at him.

It was Monday, May 7, 1973, and the Goondiwindi Grey was about to visit Goondiwindi for one of the few times in his life as his racing career came to a spectacular end.

The biggest crowd Doomben has ever seen – bigger even than that to see Black Caviar in more recent times – packed in to farewell the punters’ favourite.

“We loved him for his speed and guts,” Brisbane Amateur Turf Club chairman Sir Clive Uhr told the 25,000 fans watching Gunsynd prance along the home straight, playing to the crowd.

The Courier-Mail reported that fans gathered near his stall, reaching out to touch something that had touched their lives and more often than not filled their pockets as the greatest stake winner of the Australian turf and a horse which had won at every major track on Australia’s east coast.

Roy Higgins, who had ridden him to so many victories, took Gunsynd for one last flying gallop and when it was over Gunsynd bowed to the crowd like a maestro taking a final encore.

The traffic around Doomben was banked up long before Gunsynd arrived at the track at 1pm for his farewell performance and crowds were still streaming in as he munched on greens while waiting to walk out onto centre stage.

He was taken into the saddling enclosure where he paraded for 25 minutes to loud cheering and applause.

Then Higgins, who had won the Cox Plate on the horse a few months earlier, took him on his farewell lap, finishing with one last burst of speed to the line.

As the crowd roared, Gunsynd was then rugged up by Larry Olsen who rode him early in his career.

Five days later he was put on a horse float and driven through the town of Goondiwindi on the McIntyre River for one last fleeting visit as the ultimate grey nomad headed for retirement.

A few years back I visited Goondiwindi to hear the fascinating story of the great horse’s rise to fame, not from the horse’s mouth but from the man who steered him to a place among Queensland’s icons.

It was 8.20 on a crisp, cool morning in the bush town and Barbara Bishop was fresh out of milk.

So Bill, her husband, his body shrunken and compressed by the weight of his 89 years, put down his The Courier-Mail form-guide, carefully negotiated the rear stairs of their wooden house with a walking stick, climbed into his bright red electric mobility scooter complete with Australian flag flying from the aerial, and set off slowly and carefully for the local shops.

Bill didn’t get around as well as he used to when fighting the Japanese in New Guinea in World War II – the only length of time he’d spent away from his hometown – but he still enjoyed the slow journey on behalf of his wife of 62 years.

Back in the early ’70s Bill took Australia on a much more thrilling ride as the nation climbed on board the Goondiwindi newsagent’s great grey horse and willed him on to victory in race after race.

Inside the house where Bill had lived almost all his married life, the walls were alive with photos of his two children, four grandchildren and seven great-grandchildren – with an eighth due that month. There were photos also of his brother Jack, who enlisted in Toowoomba and has been in a sandy grave at El Alamein since September 1, 1942.

And all around the architraves were the fading photos of Gunsynd, his every fibre stretched, his nose out in front as he strode to victory again and again in Brisbane, Sydney and Melbourne.

The Cox Plate, Epsom, Toorak, George Adams, Doncaster, Sandown Cup. He was magnificent over a mile (1600m) and with a heart big enough to surge to a gallant third in the 1972 Melbourne Cup over two miles, despite carrying Roy Higgins, 60.5kg and the hopes of a nation over twice his preferred distance.

“He gave the Melbourne Cup winner (Piping Lane) two stone (13kg) and second place (Magnifique) a stone but he was still there at the finish trying to win,” Bill says. “Gunsynd was a horse that would never stop trying. He turned even little old ladies who’d never had a bet into punters.” 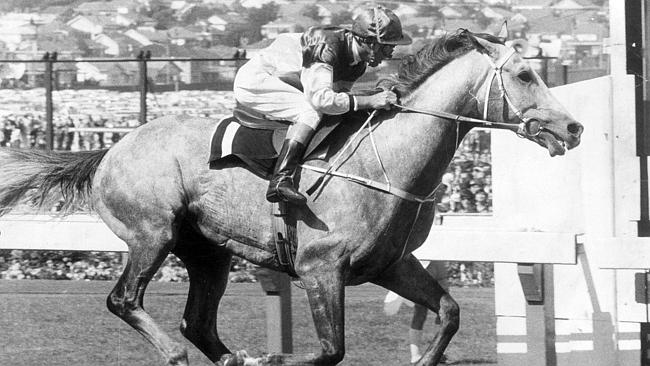 Who would have won over a mile between Gunsynd and the nation’s later hero Black Caviar?

“Oh, you can’t compare them,” Bill told me, his eyes twinkling, “they were great horses from different eras. Gunsynd won all the big mile races in Australia in a single year, one after the other. But I wouldn’t mind having Black Caviar as the second leg of the double.”

More than 40 years after Bill and three mates sat down in Goondiwindi’s Victoria Hotel and decided to buy a racehorse, Gunsynd was still the biggest thing to ever happen to the town of 5000 beside the Queensland-NSW border.

There was a cartoon of the toothy champion on a sign welcoming visitors and a statue of the Goondiwindi Grey farewelling them, a museum devoted to the wonder horse, a road named in his honour and portraits and photos everywhere.

Gunsynd made only fleeting visits to Goondiwindi but he’ll always be a champion in the town where Bill’s dad Archie, a Sydney watchmaker, settled in 1911 and took up the newsagency business in 1919.

Bill bought Gunsynd in 1969 as part of a “Gundy” syndicate with the Victoria Hotel’s owner and Queensland rugby union identity George Pippos, a local draper Jim Coorey and Winks McMicking, a grazier with a property on the road to Millmerran.

“We all kicked in $1000 and Winks went down with the money to the yearling sales at the Exhibition Ground in Brisbane,” Bill recalled.

“After the first day he rang me and said the market was very flat and he wasn’t going to go over $2000 for anything.

But Winks had spotted a yearling colt bred at Breeza on the Liverpool Plains in NSW. It was a strong looking grey with a slightly turned-in foot and Winks made sure other potential buyers were aware of the defect even though a vet had told him it would not impede the horse’s ability to gallop. He bought Gunsynd for the knockdown price of $1300 and the Goondiwindi Grey strode into racing folklore.

Under Doomben trainer Bill Wehlow he won 12 races from 22 starts, taking out the Fernhill Handicap, Chelmsford Stakes and Rawson Stakes in Sydney.

Then under Tommy Smith he became the best known racehorse in the country.

“Punters love a winner and they certainly loved Gunsynd,” Bill told me. “They said he played to the crowds by lifting his head to acknowledge them but a lot of that had to do with the jockey pulling on the reins.

“He had plenty of personality, though. After he won the 1972 Cox Plate, the Moonee Valley Race club had this huge garland of carnations to put on him but he didn’t want a bar of it. So George, Jim and I put the garland over our own heads for the photographers instead.

“`He was so popular that the local TAB had its own window just for punters wanting to back Gunsynd. Tex Morton wrote a hit song about him, “The Goondiwindi Grey.” 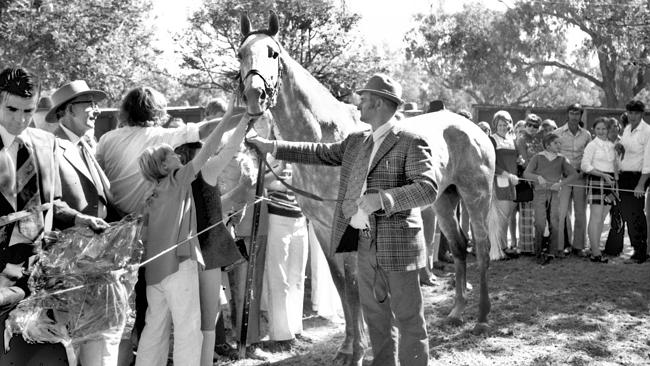 Back then the Cox Plate had an enormous boost in prizemoney from $30,000 to $45,000. It was a different time. Holden dealers were offering huge discounts on new Toranas and Monaros and Mazda had just released its new Capella. Houses were going for $18,000 at Sunnybank and investors were getting nine per cent on their term deposits. This year’s Cox Plate is worth $3 million.

After Gunsynd’s victory in the Sandown Cup in November, 1971, Tommy Smith felt he was an enormous chance in the following year’s Melbourne Cup.

But the distance and the weight proved too much even though Gunsynd never stopped trying.

The Goondiwindi Grey was retired to the Kia Ora Stud at Scone after winning the 1973 Queen Elizabeth Stakes at Flemington, followed by the Rawson Stakes at Rosehill and the Autumn Stakes at Randwick. He had 54 starts for 29 wins, seven seconds and eight thirds, compiling prizemoney of $280,455.

“If he’d won the same races today the prizemoney would probably be worth about $10 million,” Bill said.

“But we did all right. He cost the four owners $325 each and with the stud money we each made about $80,000. It was a very exciting time in Australian racing and especially for this little town. We came close to winning the Melbourne Cup.

“After the huge farewell function at Doomben when he retired the whole of Goondiwindi turned out to see him when he came here on his final trip down to Scone.”

Gunsynd’s form did not extend to the stud, though he did sire Ammo Girl, the dam of Emancipation, Australia’s champion racehorse of 1983-1984.

The great horse’s grey coat turned to almost pure white in his later years and he succumbed to cancer aged 16 on April 29, 1983. He is buried on the Kia Ora stud next to his great rival Baguette.

Bill Bishop was the only one of the owners still alive when I visited Goondiwindi and he told me he aimed to be around for a lot longer, studying the form religiously and placing his $8 trebles.

“You could say my career as a thoroughbred owner started at the top and worked its way down,” he said with a laugh. “I did have one winner since Gunsynd though. A horse called Gilu. It had one win – at Goondiwindi on protest.”

Gunsynd was Australia’s Horse of the Year in 1971-72 as part of a list that includes Black Caviar, Makybe Diva, Northerly, Sunline, Might and Power, Jeune, Let’s Elope, Bonecrusher, Better Loosen Up, Kingston Town and Rain Lover.

He was inducted into the Australian Racing Hall of Fame in 2005.