As the breeding stock Sale season draws to a close, the hard work now begins for stud managers up and down the country as they begin to meticulously plan which stallion each mare on the farm will visit once the breeding season gets underway.

With a new stallion set to bolster their already strong roster for the 2022 season in Group 1 winner Captivant, it is a doubly exciting for Kia Ora and they set about further enhancing their already high-class broodmare band at the Magic Millions National Broodmare Sale last week to support their three stallions, eventually leaving the complex with six mares including Group 2 winner Oceanex (NZ) (Thorn Park) and the very popular mare Lighthouse (USA) (Mizzen Mast {USA}).

All-in-all Kia Ora signed for five mares last week – including two with TFI Investments – for an aggregate of $2,475,000, while after the Sale it was announced that they had also bought Group 1 winner and Listed US winner Lighthouse, who was knocked down to Dermot Farrington for $1.7 million.

The farm’s Bloodstock and Breeding Manager Shane Wright told TDN AusNZ the future was looking bright for Kia Ora in terms of their stallion power and the new mares they acquired to join their burgeoning broodmare band.

“It is definitely exciting going forward,” said Wright. “We did a lot of work last week and we have a great team that all works together and we had a long list. We came home with a few, but our list was a lot longer, so we were happy to get them because it was such a hard market to buy in.

“The Australian thoroughbred industry as a whole is in a very good place at the moment. We have tried to be active at every sale and it is very hard to buy, which is obviously great for vendors, but the sales are red-hot there is no getting around it.”

The G2 Matriarch S. winner Oceanex was offered in foal to Yarraman Park’s I Am Invincible and she now looks set for a date with Kia Ora’s resident G1 Golden Slipper S. winner Farnan, who looks set for yet another high-class book of mares for the upcoming breeding season.

“Physically we thought she was a lovely mare,” said Wright. “She is by a very good stallion in Ocean Park, she has an extremely strong pedigree and she was a brilliant racehorse who always competed at the top level. 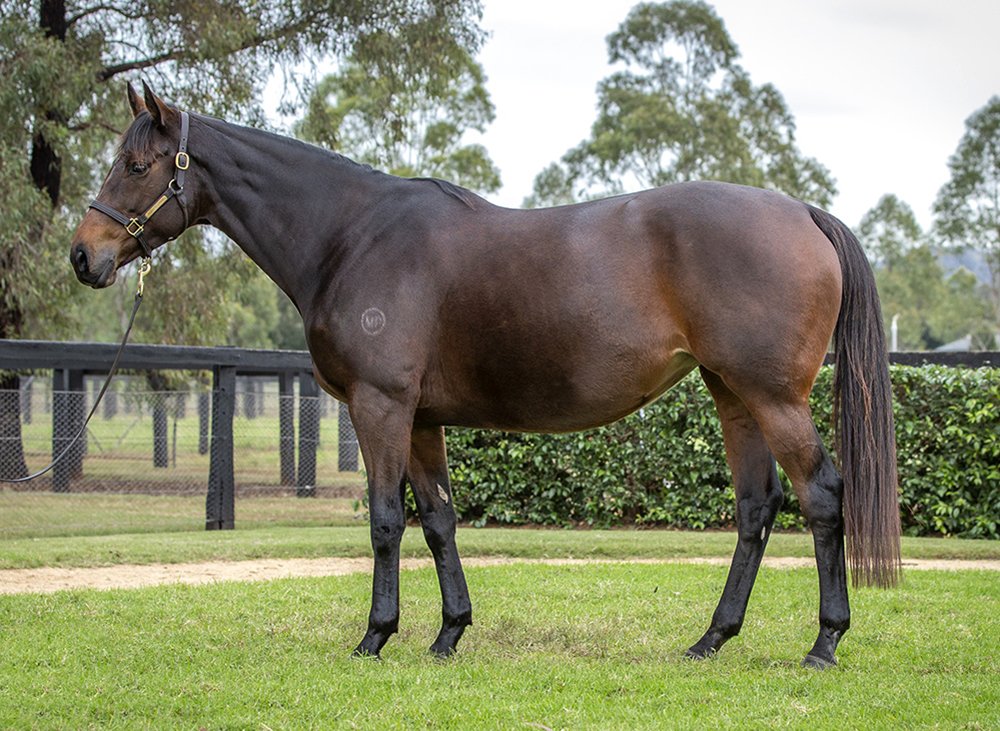 “She got across a bit of ground, but she was still successful at 1600 metres and we just thought, at that price she was a very, very good buy. In Australia, speed is a very important thing, but it is also important to have these mares that have longevity in them that can get over a bit of ground and she was just a beautiful mare.

“The I Am Invincible inside her is a very nice cover because he is one of the hottest sires in the land, he’s an incredible sire and mares in foal to him do not go cheap, especially Group 2 winners like Oceanex.”

Last week, Kia Ora also paid $450,000 for winning Zoustar mare Amuri and she was offered in foal to Farnan and she will once again visit the stallion in the spring, while dual South African Grade 1 winner Queen Supreme (Ire) (Exceed And Excel), who Kia Ora purchased for US$900,000 (AU$1,252,000) at the Fasig-Tipton November Sale last year, will also feature among the stallion’s second book of mares.

Amuri was one of 192 mares that made up the son of Not A Single Doubt’s first book and Wright said the stallion has arguably got a better crop of mares awaiting him this year than he did last season.

“He got an extremely good book of mares last year, both from Kia Ora and outside clients. Across the board, it was nearly all black-type winners and black-type producers. But, I am going through his book at the minute, I think his second book could be even stronger. Amuri, who we bought last week, will go to him as well. 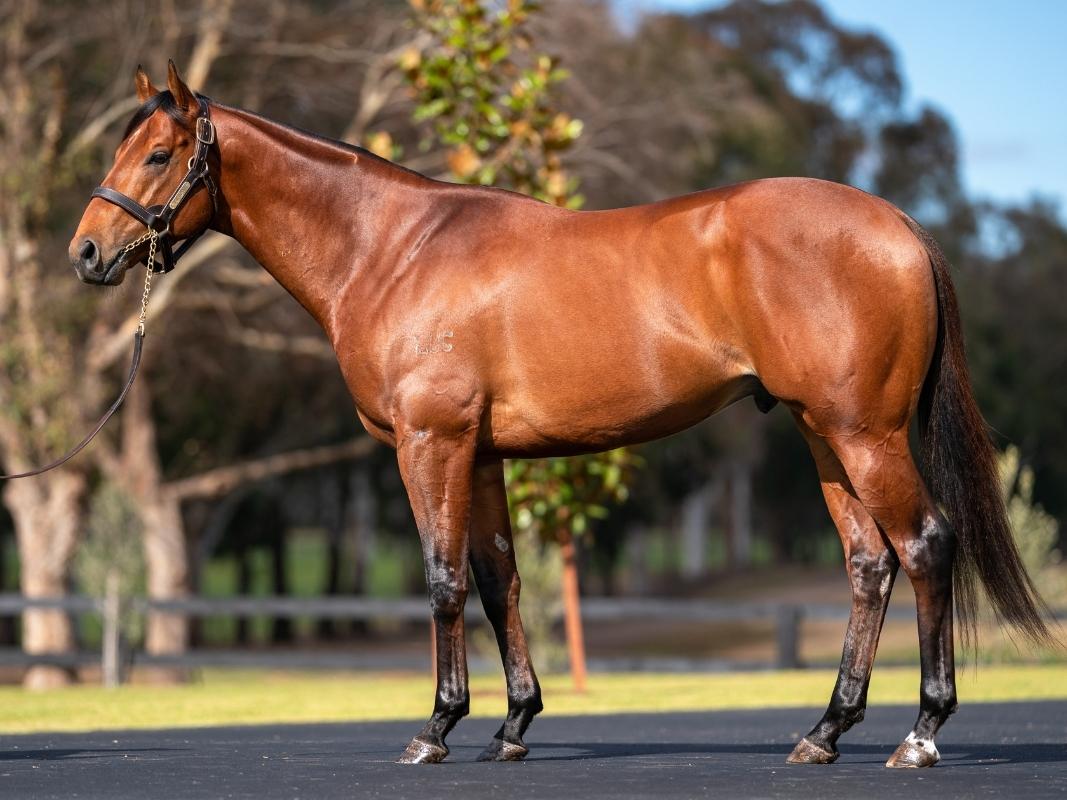 “We bought a lovely mare at Fasig-Tipton, Queen Supreme, she is a multiple Group 1-winning Exceed And Excel mare from a really good Juddmonte family, she will go to him as well – so it’s a really exciting time for Farnan.

“The book of mares he is getting in his second season is going to be a really significant book. We believe he will kick and he should be getting early 2-year-olds and we want to make sure he has that opportunity to have the best of the best.

“It is no secret that second season sires do find it a bit harder, but with Farnan it is pleasing to see the quality in his second book and it is very nice to have a stallion standing here that the breeders want to get behind as much as we do.”

The US Listed winner Lighthouse, who landed the G1 Coolmore Classic for Ciaron Maher and David Eustace, was understandably one of the buzz mares ahead of the National Sale last week and she will also be another mare set to be covered by the good-looking Farnan in the spring.

While $1.7 million is a large amount of money, Wright said, given the strength of the market in Australia at the moment, he rated her price-tag as good business and believed they did well to get her at that price. 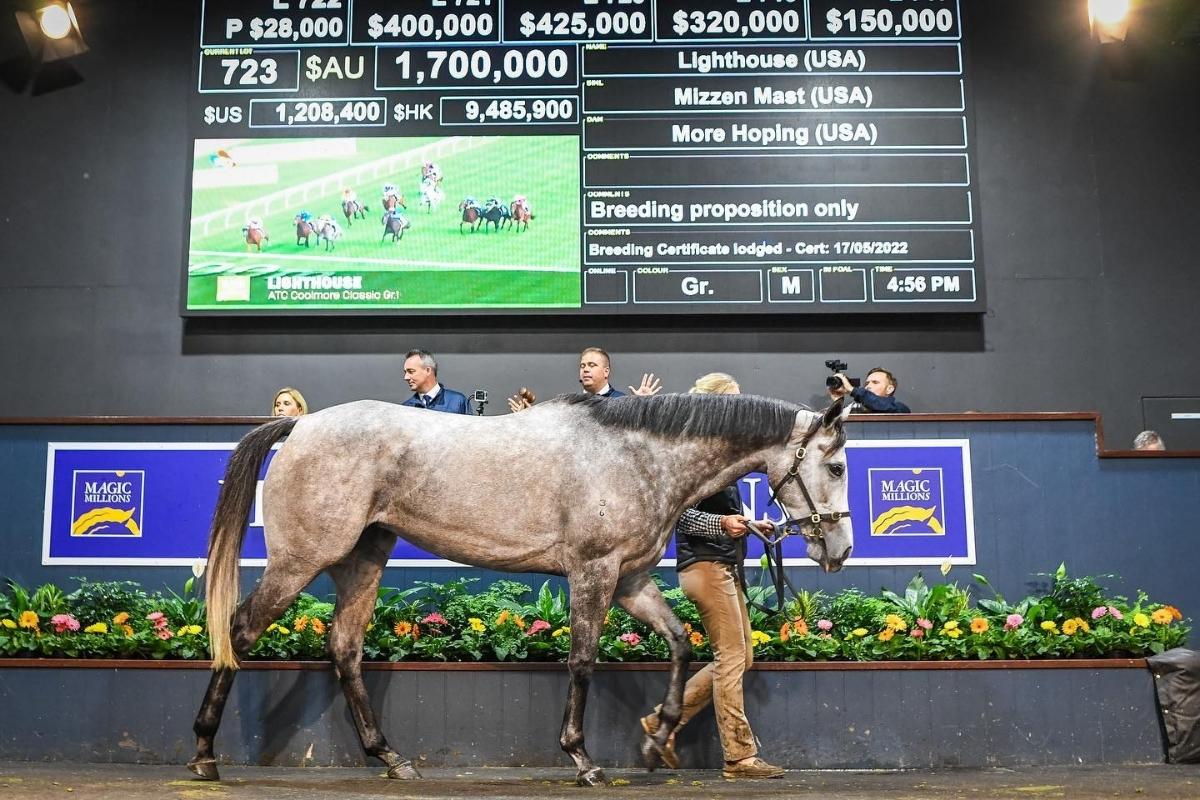 “At any sale, anywhere in the world, she would have been a standout mare. Obviously, to win any Group 1 is a huge feat, but to me there are a couple of Group 1s which really standout and the Coolmore Classic I believe is one of the premier Group 1 races in Australia.

“With the market being as hot as it was, coming away with her for $1.7 million, I was actually really happy with that business and I thought she was one of the buys of the Sale.

“She has a lovely pedigree and she is a global stakes winner and she is a complete outcross here in Australia, so she has so much going for her, especially on physical type as well. She is just a beautiful mare and I think she will be a wonderful match for Farnan.”

The son of sire sensation Capitalist will be offered to breeders for an introductory service fee of $27,500 (inc GST) and Wright said the interest in the stallion has already been very good.

“We only launched Captivant two weeks before the Sales and there has been huge demand for him and the nominations have been selling very, very well. 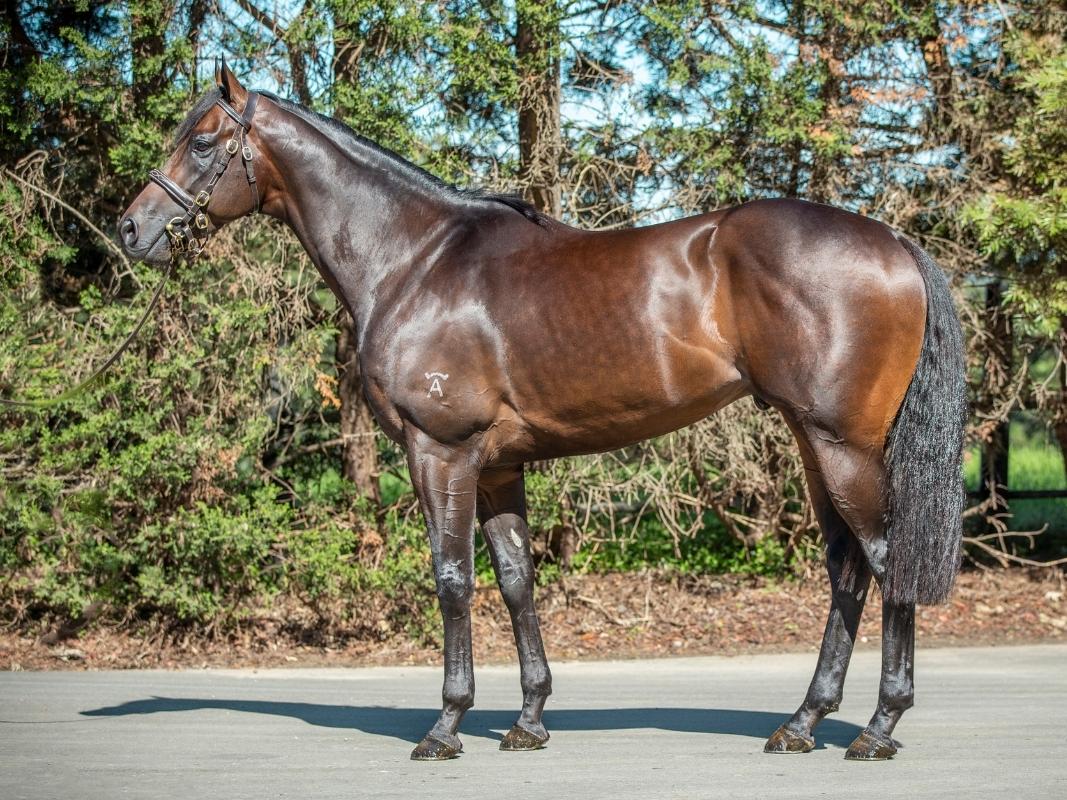 “I think being a Group 1 winner at two and Capitalist and Written Tycoon are both doing a very good job and they are standing at large stud fees now, very well-deservedly. But us coming in with the best son of the best son at $27,500, there is a big niche in the market there for him and there are a lot people that have bred to his sire and grandsire over the years that just can’t afford that fee anymore, so this horse fits that bill very well.

“We are only starting to get people on site to see him now in the flesh, but people are very impressed with what they are seeing. He is a very, very good-looking horse and has a lot of quality and nominations are understandably coming in thick and fast.”

Among the mares booked into Capitvant for his first year is multiple US Listed winner Liz’s Cable Girl (USA) (Cable Boy {USA}), who Kia Ora purchased for $360,000 in foal to So You Think (NZ) at last week’s Sale.

Prague – the good-looking son of Redoute’s Choice – will also cover his second book of mares at Kia Ora this season and Wright said he, like his barnmates, will have another exciting book waiting for him this spring.

“Prague has it all as well and at $15,000 he is going exceptionally well this year again. Once people come and see him they are not just booking one mare in but a few mares. He was a $1.6 million yearling and he is an unbelievably good-looking son of Redoute’s Choice and Group 1-placed and multiple Group winner,” he said. 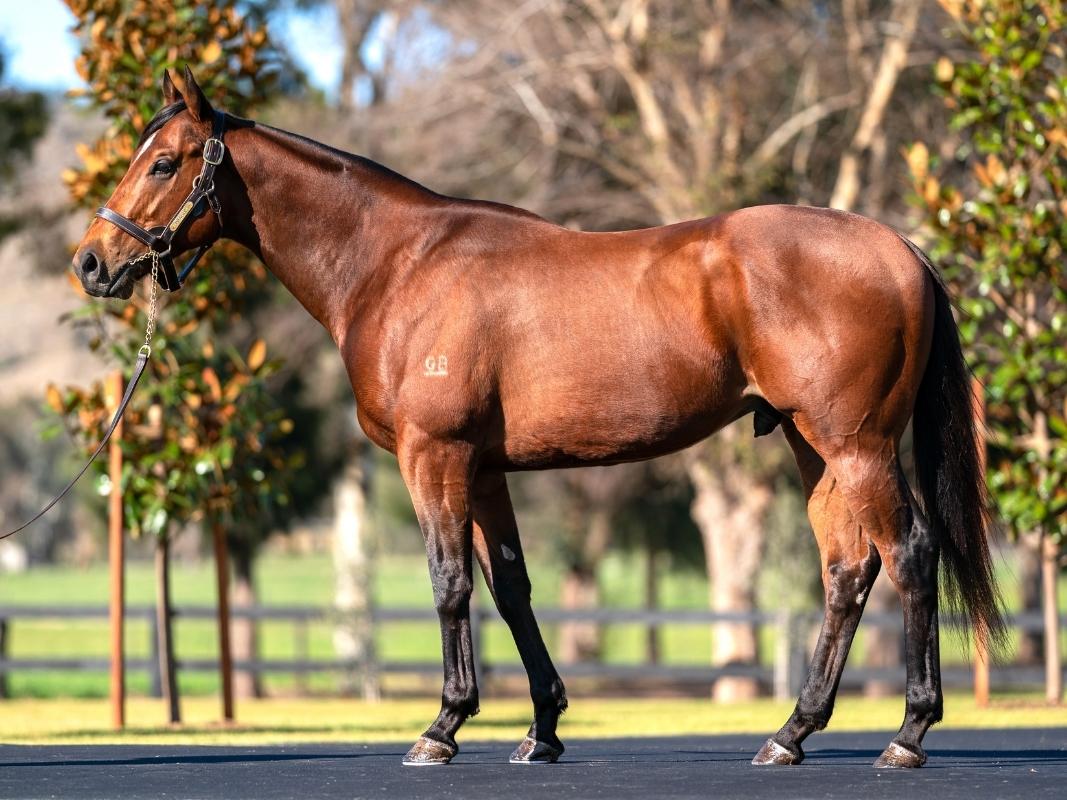 With powerful stallions and broodmares to boot, it is undoubtedly an exciting time for Kia Ora, not just as a commercial stallion farm, but also as breeders themselves.

“The stallion market is unbelievably competitive, which is great because competition is one of the best things any industry can have, I guess it is what drives it. But we knew going into this that if we wanted to compete, we had to have a product that we believed in and we were happy to get behind ourselves,” he explained.

“All three of our stallions in their price brackets are good value. We really have a stallion to fit every criteria and when they come to look at one stallion, they look at the other two as well. And in that competitive marketplace this is what you need – with the stallions it really is an exciting time for the expanding farm.”