Percy Miller was a successful businessman and a hobby breeder with half a dozen mares. In 1914 he embarked on commercial thoroughbred production and purchased the cattle property Kia-Ora, over the Pages River from the established Segenhoe Stud, just east of Scone.

With manager Bert Riddle, Miller set about developing Kia-Ora as a fully operational horse stud and by 1917 was able to offer two yearlings at the Sydney Easter Sales. It was to be the start of a sustained and most remarkable breeding record.

In the same year a horse called Magpie ran second in the English 2000 Guineas and eventually came to Australia where he was acquired as a stallion by Percy Miller.

Over the next decade Magpie became one of Australia’s leading sires producing many feature race winners at Kia-Ora including Windbag, Amounis and Talking. This became the pattern with a succesion of successful sires standing at Kia-Ora.

Most notable of these were Midstream and Delville Wood who also became premiership winning sires and and were responsible for such champions as Shannon, Delta, Hydrogen and Evening Peal.

They were to leave a legacy in a superb brand of brood mares but most remarkable about the record of Kia-Ora was the high percentage of winners that came off the property and the huge numbers, for the times, of well-grown yearlings that were sold off the stud.

Bert Riddle was the manager through all these years but on his death in 1952, four years after Percy Miller, the stud was scaled back by the family and finally dispersed in 1957.

Kia-Ora had a series of owners from then on and amongst the stallions that stood at the farm were Australian champions Gunsynd and Baguette. Despite the numbers of horses bred at Kia-Ora being far less than before the winners kept coming, including top two year old Gretel and Caulfield Guineas victor Sou’wester.

The present owners took over Kia-Ora in 2000 and have re-developed the famous stud farm returning it to its former glory and once again making it home to some of the best bred mares in Australia. 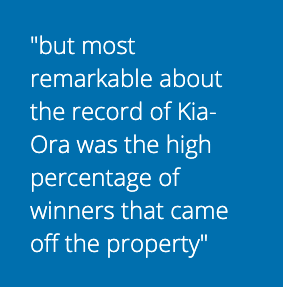 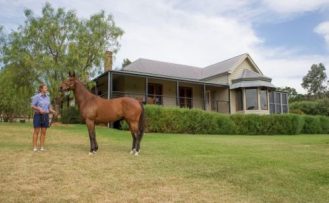 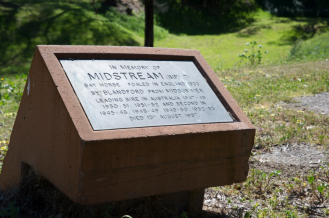